Though you probably wouldn’t know it based on a casual conversation with me, I’m very passionate about a few things in life 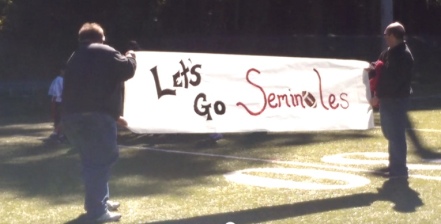 —my family and kids ranking at the top of a very small list.

I don’t have many people I’d call a “best friend” though I have a good number of very interesting people with whom I rub shoulders with infrequently. We can connect as often as it happens and be completely cool with the fact that neither of us have made an effort to go have a beer together, or whatever.

Outside of work, probably the one thing I do the next most of, is spend time either coaching, or watching my kids play sports. It’s a year round thing in our house—football, basketball, baseball, cheerleading, dance—you name it. So in any given year, my kids spend a substantial portion of their free time with anywhere from 5-10 different coaches, and a cadre of assistant coaches, all “carefully” selected by our local city recreational staff.

Overall, our Rec staff do a good job. I’ve coached a number of years, across a number of sports and by and large most of the coaches are just dads who want to be involved. Yes, there’s “Daddy Ball” where a few dads get together and form a “team” to dominate the league, and there’s other politics, but generally speaking, we all have good intentions.

But when you work with that many different people, problems are bound to arise. I’ve had to step in and replace a coach with a drinking problem. I’ve felt obliged to step in and speak with a coach who seemed more a drill sergeant than a teacher—and I’m still feeling the backlashes of that one. There’s also been some very expensive programs where the “volunteer” coaches just want to show up and chit chat rather than actually work with the kids.

And so it was that in one of my recent conversations with our local sports staff, I was told that I’m the most vocal parent he’s ever had—and that made me pause.

It’s true, I’ve filed my share of informal complaints, both as a concerned parent AND as a coach and maybe sometimes I should have given a particular coach a few more days before sending a “WTH?” note to Rec staff, but I also feel like it’s sort of my job, as a parent, to be vocal.

Parents pay a lot of money for their kids to play sports and in our case, our kids are actually really good athletes. We’re not a family that’s just happy that uncoordinated Johnny made a team. No, we’re a family who’s trying to make sure our kids are working with coaches who have the patience and experience necessary to help them progress.

So yeah, when I see a coach working his way up through the league based solely on the fact that he’s volunteering just so his average kid can get a spot in one of the league’s top tier teams, even though that coach is a tyrant on the field who bullies parents to the point where they’re afraid of saying anything lest their child get treated poorly (and stuck in the outfield), I’m going to say something.

And yes, I’ll accept whatever blows back on me because of it, but I detest bullies—kids and adults alike—and I’ll do whatever it takes to protect my family.

My team may not win every championship, but nobody ever cried on my field (OK, that’s not entirely true, but it wasn’t my fault…she was just really tired and didn’t want to be at practice) and to my knowledge, no one ever left my field not wanting to play the sport any longer.

If we win some games, the kids have fun and they learn a little something along the way, that’s a “W” in my book.