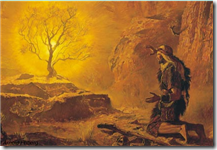 Do you remember in the Bible, where it goes something like,

…well, life is kinda like that too. One thing always leads to another. Rarely is there ever a,

“…and Abednigoriah decided enough was enough and he sat down, surveyed his kingdom, and chillaxed with a cold one.”

It’d be pretty cool if it did though right?

I’m slowly getting things done at the house, but it seems I’ll never catch up. For instance:

But CareerMom, despite being full-term pregnant, is being a really good sport about it all. She knows I’ve been running around like a chicken w/out a head and she has generally refrained from “reminding” me about this or that. But last night, after dinner, I mentioned that now that the curtains are up, how she could really finish decorating the baby’s room since she now has the baby’s bedding as well. And she said, “Well, I have sort of been waiting on you to adjust the crib mattress up a little higher (we had it adjusted to the lowest setting so MLE couldn’t jump out), because, I suspect, she can’t bend that far over into the crib in order to retrieve and properly outfit the mattress, being nine months pregnant.

I know it doesn’t sound like a big deal, but despite the crib being of well-made Italian origin, they used your basic cheap-o aluminum frame and springs for the mattress holder, and of course, the tallest setting lines up directly with the slats in the crib, making it a complete pain in the arse to adjust.

But now that’s done too and there are only about 20 more things I need to get done in the next three weeks, else risk not getting them done at all until the baby turns five, at which point I figure she’ll be able to play by herself thereby giving daddy time to do his thing again.

I, did not. And this is most likely what skews my views.

Despite being mostly an only child growing up, to say I was spoiled would be like saying Richard Simmons is a heterosexual. It just ain’t so.

But I did have my own room, and my own bathroom and generally speaking, I had my space. This is something relatively new here in America I think. If you listen to our parents talk about life growing up, they all slept one on top of the other in a one-room farmhouse and they shared a half-bath and fought over who got to be the first to take a “Shower” using the sun-warmed water in the outside hose. Our kids, on the other hand, are spoiled brats. They have their own rooms, and in many cases, their own bathrooms. They do this and that and they want for nothing.

But one child or um…five children, it’s your prerogative right? Heck, if you want to move to Utah and live like the Duggers, that’s fine by me as long as you can afford them and can give them the attention each of them deserve.

This past weekend, I was able to see just how important that “give them the attention each of them deserves” is. I took MLI up to my mom’s house in Tennessee…just we fellers. My mom has a house on the banks of Little River. Where her place is, the river is about 30 yards across and for the most part you can wade out in it and jump from rocks, throw rocks, fish, swim, and get in a kayak without flipping. It’s just about perfect.

I picked him up after Summer Camp on Friday and deposited him in his booster seat in the back of my truck and his eyes lit up when he saw that Daddy has magically installed his Wii. Seeing it, he looked at me and said, “I can play it the whole way to Grammy’s?” Proudly, I said, “Yes you can.”

And he did. The whole 3.5 hours. It was magical. He played the Wii and I drove, enjoying the feel of that big V8 engine under my fingertips. I passed bumpkins, I pointed out cows and I listened to endlessly blissful music on my satellite radio. And there was no whining.

When we got to Grammy’s, we played in the river until it was too cool to stand it and then went in and had dinner. On Saturday we kayak’ed, caught more small-mouth Bass than I’ve ever caught in my whole life, and we generally had a good time…just the two of us.

And I learned something this weekend: Kids are different away from their siblings. There is no competition for toys, time or affection. They “converse” instead of whining and screaming. In short, they are a pleasure to be with and only during these “alone” times, do you really get to see what kind of person your little ones are becoming. 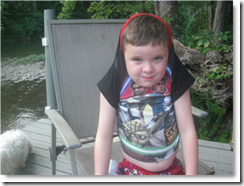 And this is where my preference for a smaller family comes into play. Already, I’m wondering where I’m going to find the time to do this “x 3” when we have a little girl. I guess it’s just something you have to MAKE time for. CareerMom has a brother who has eight kids and is working on number nine and though he is the consummate family man, I’m sure there are times he wishes he could just grab one and take off like I did for the weekend.

Babies and toddlers are great, but let’s be honest, once the shine wears off, it’s just a lot of work. MLI is five now and I can honestly say that I really enjoy being with him now – with or without the Wii!

The baby is due in one month. (sssssh! don’t say it too loud or she might hear and come early!)

I am Waaaay under-prepared! As of this morning, here is what the baby’s room looks like: 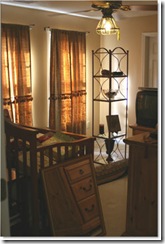 As you can see, it’s pretty much…not done. CareerMom painted it a couple of weeks ago, but other than that, it still has all the trappings of a guest room.

Oh, I did move MLE’s crib out of his room into this room, but that was basically to make room for his big boy bed (which, unsurprisingly, isn’t helping him sleep any later!).

Those of you who have been following my blog for a while know that it took me a bit of time to get on board with this baby coming (it being such a shock and all), but I assure you, I’m not putting this off for some emotional reason or because mentally I think, “If you don’t build it, it won’t come.”

I’ve actually been very busy elsewhere in the house and THAT project is the lynchpin upon which the baby room’s completion will fall.

Our house is one of the only ones on our street w/out a finished basement and while I’m not one to “keep up with the Jones’,” (wow, what a weird series of punctuation. I’m not even sure that’s grammatically correct…) I am cognizant of the fact that as my chirrun get older, they will drive me crazy—that is unless I have a place to send them where they can venture forth and destroy.

Also, on a more practical note, since the baby room is taking up what used to be the guest room, AND since I’m trying to encourage MY family to come visit (and thereby babysit), I wanted to give them a place to go—a sanctuary if you will—when they do come. So, the basement consists of a bathroom, a bedroom, a GREAT room, and some other room-area that as of yet, has no known purpose (but it’s wired up for cable and Internet).

As you can see, it has no carpet; no doorknobs, no mirrors in the bathrooms and no ceiling fans (or um…light fixtures in the bathroom), but as soon as the carpet comes in, I’ll at least be able to move the furniture currently in the baby’s room, down to the basement and then baby room decorating can properly begin.

Wouldn’t you know it…my contractor went on vacation this week.

I was writing a blog post about my kids and how much they wore me out over this past three-day weekend—you know, generally complaining—and then I received an e-mail from CareerMom.

A friend of hers from work has a five-year old son who was diagnosed with an extremely rare form of brain tumor last October. Despite treatment, they gave him less than a year to live. His parents asked him what he wanted to do before he left his family and he said, “Christmas in July.” So, CareerMom and others contributed to helping him fulfill his final desires.

According to his parent’s blog, he passed away on July 4th. His last few days were not easy. He was in noticeable pain.

Even writing this, I can’t imagine the strength it takes to confront this kind of finality on a daily basis—to know that each time you hug your child could be your last, or that each harsh word you spoke to them could be the last one they hear from you. It really brings things into perspective.

My boys drive me crazy, but it only takes something like this to make you realize what a gift they are. Sometimes we have to stop and really look at them as children, rather than just as something that—at that moment—is an annoyance, to really appreciate what we have.

Ethan, Aiden, if ever you read these posts, know that beneath it all, is a profound love for the both of you.

Give your kids an extra big hug today.