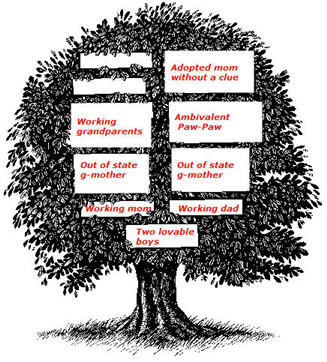 Prior to having children of my own, I scoffed at the idea of “It takes a village” to raise a child. My abhorrence might partly stem from the fact that the so-named book was released by Hillary Clinton (I say “released” because you know she had a ghostwriter), a person I have a particular dislike for.

Now that I have two children of my own, I find myself drawn to this idea of a village approach to child-rearing, especially when I talk to other parents who have willing grandparents that frequently offer to help watch the children while the parents take some free time. So my idea of a village you see, differs quite significantly from one Democratic hopeful in that I don’t want the “state” raising my children; I’d quite rather prefer it be people I know and love rather than some underpaid, sullen worker-bee who is only there because the public school system wasn’t hiring anymore lunch-room workers.

The only problem is, we don’t have a village support structure within arm’s reach. Oh, we have neighbors and we have co-workers, but in my mind, a village is full of people you grew up with-your family-and that’s what we don’t have. But not for a lack of sheer numbers mind you…we have that a’plenty. We have what you might call a “geographically challenged support system.” Let me explain.

On my side of the family, I have one dad, one maternal mother, one legal mother who adopted me along with my dad and who has been divorced from said dad for nigh on 28 years now. I also have an additional mother to whom I am very close. But guess what? None of the aforementioend tree branches live in even the same state. So even if they wanted to help out with the kids (which is questionable as far as at least half of them are concerned) they cannot.

On my wife’s side of the family, we have a traditional mother and father, along with six other siblings. Her mom and dad both work. After being a SAHM to seven kids, and immediately after my wife got pregnant with our first child, her mom announced she wanted to be a teacher. Additionally, between the seven kids, they now have 14 grandchildren. So, by the time the evening or weekend rolls around, they are in the same boat we working parents are in; they want their own free time and the very thought of taking care of two rambunctious children is about as savory an idea as taking a long road trip with the kids strapped into car seats for hours on end (see blog entry titled: “You gotta know when ta hold em…Know when ta fold ’em“).

So yeah, I’m a little bitter when my wife and I want to go out and have a date and it costs us an extra $40 on top of the date just to get someone to watch our kids…and that’s usually my wife’s little sister. I’m envious when friends tell me their kids are no longer allowed to go visit the in-laws for various, hygenic reasons. And yes, it’s annoying to have to take a vacation day off of work just so I can have the free time to catch up on yard work and maintenance chores that need doing around the house (ok, I occasionally work a round of golf into my vacation day too).

I don’t know…I’m just burned out I guess, and while I have a very promising, but short vacation coming up–sans family–I know that it will only be a matter of a a few days upon returning that I’ll be back in the doldrums again wishing for some time away.

So Mrs. Bill, I find myself swayed by your logic, but still sternly against your choice of execution. While I’d love to have the village, hell, right now I’d settle for a supportive telephone call from a few of its residents.