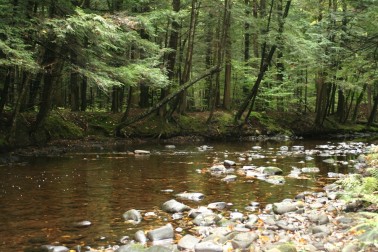 I returned Sunday from a trip to Pennsylvania—Honesdale, PA to be exact—where I was visiting my maternal mother and my sister (oh ok, half-sister). Honesdale, in case it sounds familiar, is the sight of the parade at the beginning of the Gina Davis, Samuel L. Jackson flick titled “The Long Kiss Goodnight,” where Gina Davis plays a lowly-housewife jolted out of her hum-drum life only to find that she’s really a top-notch assassin with repressed memories. I give it two thumbs up.

At any rate, I made the distinction that this is my maternal mom because as many of you know (as if there were many of you) I’m adopted and have a caravan of family pieces scattered around the U.S. like goldfish crackers are scattered around the backseat of my truck. My maternal mom, lovingly self-referred to as “Bio-mom,” is a 50-ish aged woman enjoying a rebirth now that she and her husband (also father of my two half-sisters) have gone separate ways. She has a new boyfriend, a new hair-do, and has lost a number of pounds and has apparently sent them packing down here to Atlanta where they were delighted to find a DNA match for a new home around my waistline.

I did a lot of face studying while I was there this time, which is what one does when one looks nothing like anyone in their immediate family. And as one restauranteur my Bio-mom knew remarked upon meeting my sister and me, “Her…I see the resemblance, him, not so much. Must take after his father.” After which I simply sat and enjoyed the momentary noise of the crickets chirping outside until my Bio-mom filled the silence with, “He does.” Said restauranteur felt suitably embarrassed and beat a hasty retreat.

But it’s true, I don’t really look like my mother. I mean, perhaps there is some resemblance, but nothing like there is between my full brother or my two half-sisters so I really have no one to compare myself to.  Which I suppose is kind of good, unless I ever want to know what my hair will do by the time I’m 50 (I’m already going silver so I have a pretty good idea).

The weather turned nice and fallish just as I arrived and my mother and I suited up and took the bikes out on about a 15-mile jaunt. We kept up a pretty good clip actually, stopping a couple of times for a scenic break (the picture at the top is one break we took). I also got a couple of good workouts in at my sister’s house where her husband has set up a gym fancy enough to rival most hotels I’ve stayed at. So all in all, I felt good about all the wine and cheese I ate while I was there.

Monday morning I dropped by an old bosses’ office to say hi and I mentioned my weekend to him. Knowing that he is a recreational biker, I also mentioned that I rode about 15 miles this weekend. Then, as a courtesy, I asked how his weekend went and then I listened with increasing agitation as he explained how he did a 100-mile cross-mountain bike race up in the North Georgia mountains. Ah well, I guess I did ask.

I wonder what time the gym opens in the morning…

One thought on “The Family (You Don’t Remember) Resemblance”