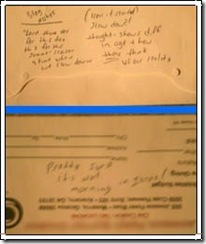 After the Assistant Pastor spoke this bit o’ prayer this morning during church, I wrote it down on the back of a tithing envelope during (as shown here) because I felt it quite succinctly illustrated the vast chasm that we have discovered at our current church. With our busy schedules, we find that the early service is the way to go. Unfortunately, this means we’re in there with all the lil’ blue haired ladies and the organ music. I think the later service is a bit more up-tempo, but not by much.

What struck me about this opening prayer this morning, and what I whispered to CareerMom, much to the chagrin of the worshiper behind me was, “Slow down in the summer? What are they talking about?” But I got to looking around and realized, “Hey, when you’re 65, and the heat rises above your age, you probably DO slow down.”

So anyway, I guess this means we’ll be church hunting again. We thought we’d found a quasi-home in this new Baptist church, but small issues with the children’s rooms (waaay too young for our kids), coupled with their trying to pull the wool over unsuspecting folks’ eyes today by supposedly broadcasting the pastor’s message from Israel while a bunch of people are there on a mission, has just done it for us.

I mean, they didn’t come right out and say the service was “Live from Israel,” but they didn’t say it wasn’t either, leaving those who are geographically challenged to believe that 9 a.m. Atlanta time, is also roughly breakfast in Israel–an oversight I had a hard time swallowing as completely honest.

Oh, and the pastor’s reading the entire “Sermon on the Mount” from Mathew, since he was standing roughly where Jesus was supposed to have preached the sermon, was just too much.

It’s all good though, being raised a Pentecostal of the “X of God” sort (e.g. “Church” of God, “Assembly” of God, etc.) and CareerMom being a reformed Catholic, these Baptists beliefs were sometimes difficult to attenuate to, so it’s probably all for the best.

But man, I do seriously hate trying out new churches. Guess I’ll put on my fake smile and my, “I’m so glad to be here” pants and give it a whirl!

One thought on “Another church bites the dust…hey hey!”