My plumber arrived on time yesterday morning, apparently from Georgia (formerly part of the Soviet Union, not the state in which I live), and commenced working. However, based on a previous conversation I had with his office, I was under the impression that he would be using a pipe replacement technique in which they slide the new pipe inside the old pipe and then pull it all the way through, splitting the old pipe in the process. The idea here is that you can run a new line without ever having to fire up a trencher.

That was not to be the case.

By noon, I had a very circuitously trenched path from my water shut-off valve, down the hill, around my grass, through where some of my prized bushes were placed, under my sidewalk, and then through yet more bushes (flame creeper azaleas).

When I saw the path of death and destruction, I nearly cried. Me, a grown man.

The fellow doing the work, in broken English, explained why the “split and replace method” didn’t work and why he had to trench, and then I explained how he’d just destroyed about $300 worth of plants, not including the $600 Seiryu Japanese Maple that he laid his boring pipe against and rubbed off a 1.5″ strip of bark, right before WINTER!!!!

I was pretty upset.

By 4:30 p.m., he had the pipe in the ground and was just letting the PVC set before turning the water on and I began the arduous task of getting my plants back in the ground. Unfortunately, he put the pipe right under three of them, which meant, despite his having buried the pipe 13″, I still had to raise the mounds up where I put the plants just so I could cover the existing roots.

I fumed. I “huffed.” I made very annoyed screeching sounds when I talked. It was not my finest moment, but this was like having someone come into your house and write all over your walls with pink magic marker and then having the paint store tell you that they don’t sell your particular color anymore!

In the end, he helped me put everything back and I watered it in as best I could. I surveyed the damage again this morning and it looks like most of my big stuff will make it, though I lost an entire section of Creeping Jenny and probably two Flame Creeper Azaleas.

Here’s a before and after: 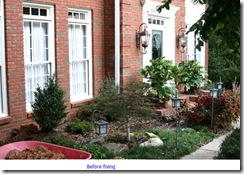 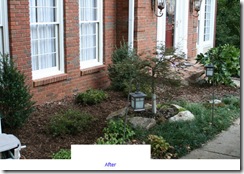 But we have water now. I washed dishes, I cleaned, I wiped things down, I FLUSHED! (repeatedly). It’s a great feeling. Honestly, I don’t know what people did before modern plumbing. I really don’t!