Carving pumpkins is not easy, unless you’re Bob Ross, who I imagine could carve a pumpkin in his sleep while dreaming of “happy places” with tree lined streams and snowy mountains.

We never carved pumpkins when I was a kid, so I don’t have a high water mark set by my father that I have to try and top when it comes to carving pumpkins. But with all the hype around it, and with the plethora of pumpkin carving utensils on the market, you’d think that any schmuck (can I use that word if I’m not Jewish?) could carve a decent pumpkin, thereby reaching new heights of hero worship with his kids.

“Not so!” says the wise man whose wife has been outta town for five days now…

When I was at Old Tyme Pottery earlier this season, I happened upon a pumpkin carving kit, complete with little pinhole saws for cutting those intricate corners, a scoopy thing to pull out the punkin guts, and some paper templates and glue to guide you on your way to punkin carving greatness! Now, I’ve never used a kit before, but I’ve always wanted to. In my mind, after using this kit, I’d be able to turn out one of those Award Winning Pumpkins like you see on TV.

So I bought it and I have been waiting impatiently for the day when I could whip them out and bust a move on a wary punkin; but alas, it was not to be.

And that little scoop thing…was made for little hands and not for the adults who will actually be carving the pumpkin!

So…after snapping off the second saw, while trying to talk on the phone with CareerMom to catch her up on all the cutesie things the boys have done this week, AND while trying to throw the ball for the dogs to give them some exercise, while ALSO trying to keep MLE from stomping in the bowl of pumpkin guts, I finally had to just put everything down and STEP AWAY from the pumpkin!

When I was finally able to again focus on the task at hand, I realized that sometimes, a man has just got to be a man. With that, I ordered the boys (and dogs) to stay put, while I went to the basement and got out the old standby pumpkin carving tool:

If you look closely, you can still see pieces of pumpkin on the blade.

In addition to being just “the bomb” for carving holes in pumpkins, it’s also wicked looking, which gives me additional “cool” points with my kids!

It’s not so good for detail work though, which means that all I was able to do last night was the regular pumpkin face.

For the really cool pumpkin design we have planned, I might have to bring out the big gun: 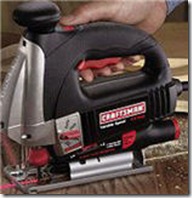 Don’t laugh till you’ve tried it. There’s nothing quite like the feeling of a saw shredding through the soft flesh of a pumpkin at high RPMs!