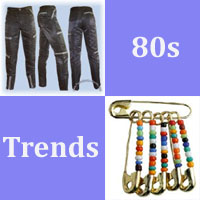 I never got to wear parachute pants. Never got to feel its plasticky goodness against my skin.
I didn’t have friendship pins to give other kids to wear on their shoelaces, although I DID have a pair of those wide, neon shoelaces once that were popular in the early 80s.
Neighborhood kids didn’t play at my house because I didn’t have Star Wars action figures or any of the cool toys for that matter.

I had weeble-wobbles and a ball. That was pretty much it.

I knew that I didn’t have much, but I don’t know if it’s because we didn’t have much money, or simply because my parents didn’t know how to spoil a child. Both my parents were raised in multi-sibling families and neither had much money and I suppose their parents’ spending habits transferred to them. And as it turns out, my parents’ spending habits transferred to me as well.

And that’s why I say, “Thank the Lord for spoiled kids” a-la CareerMom.

Though she might disagree, compared to me, CareerMom’s childhood could be likened to that of Richie Rich. They weren’t Ga-Jillionaires, but they had all that kid-crap that I never had. They may not have been on the cutting-edge of trends, but they at least had a stake in the game. Me…I was never even an also-ran.

Though we’re very similar in our approaches to raising children, there are areas where CareerMom and I differ, and in many cases, that’s a good thing. Take this idea of spoiling kids–if it were up to me, the kids would have what they “Need” and maybe something special every now and then. If it were up to CareerMom (and an unlimited bank account), they’d have that and so much more.

Take the latest trend, “Silly Bandz.” Have you seen them? Like everything else, they’re nothing. They’re little pieces of nothing that every other adult in the world is smacking their foreheads over and saying, “Duh! Why didn’t I think of that?” Basically, they’re rubber bands, colored and shaped like different things–animals, dinosaurs, space stuff, etc. And you’re not cool if you don’t have one, or 300 of them.

Obviously, these things never even showed up on my radar. I never would have known about them had CareerMom not shown them to me after having bought a pack for MLI, who has now used most of his birthday/chore money to buy several packs, which he trades with his friends at school.  CareerMom, on the other hand, uses them as rewards (some would call them “bribes”) for good behavior. Either way, it adds up to the fact that my kids are “cool” thanks to my wife.

Would I buy as many as she does? No.
Would she buy more if I didn’t look at her askance whenever she buys more? Yes.
But, we balance each other out and in truth, I’m glad that she spoils the kids a little. If nothing else, it means that in 20-30 years, neither of them will be blogging about how deprived they were!

2 thoughts on “Thank the Lord for spoiled kids”