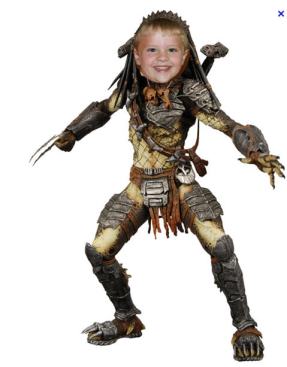 It started out as this noise back in the back of his throat–not unlike the sound made by the “Predator” (just like this guy does it). He would do it usually while concentrating on something else, so I’m not even sure he realized he was doing it. Background noise tends to really get on my nerves, so after a while, I’d start saying, “Aiden, please stop making that throat noise.” Career-Mom who is normally quite stoic around such things, even succumbed after a while.

Today, it’s not uncommon to hear any number of things coming from him, pretty much anytime he’s awake:

This happens even when he’s eating. Imagine, if you will, a child with cereal in his mouth and humming at the same time.

Yesterday, I think I said, “Aiden, mouth noises!” at least 15 times and that was after ignoring it as long as I possibly could. I’m told that several of CareerMom’s nieces and nephews do the humming while eating thing, so I blame her naturally.
And at any rate, I only had facial ticks when I was a kid (like licking your lips so much that it created a half moon raw spot above and/or below your lips) rather than audible ticks.

Whatever the cause, clearly my fussing at him isn’t working. Here’s to hoping he outgrows it.

3 thoughts on “Daddies vs. Predators”