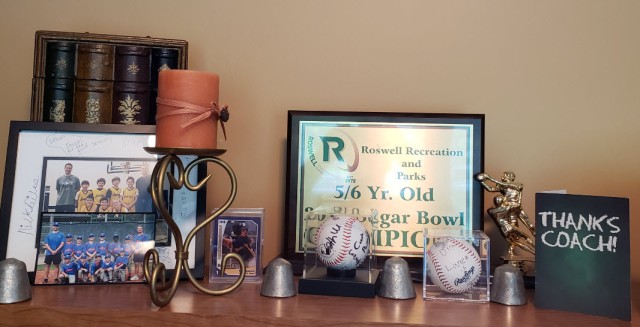 My kids are now 14, 11 and 8. And they all have played, and continue to, sports in our town’s youth programs. With the exception of my daughter’s soccer, all of the other sports are coached by parents–usually dads, with a mom every now and then.

The first season or two when my oldest son played, it became clear that some of the parents didn’t have sports backgrounds, or were just in it so that their own kid didn’t get stuck playing defense all the time, or didn’t get stuck in the outfield where no balls every dared.

So I have coached my share of sports: soccer, flag football, baseball, and basketball. And I’ve coached “Rec,” which means that everyone who comes out, plays, even if they have zero athletic ability or interest. And I have coached, “Select,” which is better, because you actually get to draft a better team.

But every season, as the tryouts or drafts draw near, our local Rec organizers send out pitiful email about needing coaches and they make sure to remind us that without more volunteer coaches, teams will be large and kids won’t get much playtime. For those of us with kids who are actually good, the thought of having to play with kids who are not, but who also get equally mandatory play time, is just defeating.

We played 5×5. I had 8 kids on my team. There was a draft, but it was a draft of all the kids who came out. So, your first pick was usually your own kid, since most of us coaches had kids who were good players, and so they were ranked high and therefore our “First Round Draft Pick.”

It quickly went downhill from there. By the time you’re on the 4th round, you’re having to pick from kids you had ranked at tryouts as piddling at best and your only goal was to get someone who could at least take instruction and had some little bit of athletic ability.

I ended up with:

We had a decent year. We started out 4-0 and then just sort of unraveled ending up I think either right at 500, or slightly below it. I had two kids who could shoot and that was it. It’s hard to win that way. But it is what it is.

I was so frustrated by the end of the season that I drafted an email to the league, which I never sent. I’ve been pretty vocal in the past and I paused before sending this to make sure I wasn’t just being petty; and then I just never sent it.

In retrospect, I don’t think it’s petty. But, I also don’t think they care. That said, if you’re in a position of running a youth sport in your community, and you rely on volunteer coaches; this is something you should read:

Not knowing what opportunity we will have to provide feedback in the post-season, I would like to offer some thoughts based on this season.

To start, 8 kids is too many. Most of mine showed up for every game, so I had three kids on the bench most of the time. It’s especially too many when some teams get 2 hat picks—3 really if you consider the final round of actual coach picks, a hat pick, which it pretty much is. This means that at any given time, I have at least one kid on the court who literally has no idea what he’s doing and usually another kid who rarely comes to practices. That means I have two kids on the court at all times that have no clue what’s going on.  Forget about trying to run a play.

Maybe not all coaches had this issue, but I had a kid with obvious behavioral problems that I was constantly having to deal with both on the court and on the bench, but he came to every game. Couple the above with the playtime restrictions and how complicated it is to sanction kids who don’t show up for practices, but show up for games, and you really make it not fun for coaches.

Now I know the argument here is that it’s Rec ball and it’s supposed to be fun and non-competitive and open to everyone. But the reality is that you’ve got some really good players out there and coaches—like myself—who put in a minimum of 8 hours a week prepping for practices and games and playing them. These players, their parents, and us coaches take it seriously, and we all should. Anything worth doing, is worth doing well. But it’s a disservice to all parties when coaches are forced to play kids who never show up for practices, alongside—and at nearly equal playing times—kids who want to be out there and who have put in the work. The process for documenting and dealing with these kinds of issues are ridiculously onerous and frankly, it puts the coaches in a horrible place with parents, rather than the league taking up the issue and dealing with it.

I’ve coached every sport my kids have played in Roswell: soccer, football, basketball and baseball. Every year the Rec sends out messages pleading for coaches and every year, moms and dads step up. But it feels like the love goes right out the door the moment you get your team. I’ve sent requests for things this year that went unanswered for weeks. On top of that, we had tournament brackets released at the last minute (I know you were waiting on some older kids’ games to finish, but our age group was done on Monday, and we didn’t get the standings until Thursday, the day of the tournament) with seemingly no respect for the fact that in addition to coaching, most of us have full time jobs, plus other kids playing sports, etc.

Once the season starts, it’s parents first and coaches last—one of the league’s members even said that in the coaches’ meeting. And I’m sorry, but that’s wrong. Without the parents who step up, there would be no teams, plain and simple.”

There. I said it. Time to move on.