For a moment, I forgot I was grown up.

Life is a timeline of events that affects us in ways too small to notice in the moment, but in a retrospective, taken all into account, undeniably establishes who and what we become.

One day you’re riding your “Space Invaders” Huffy bicycle, wearing red-ringed tube socks. The next day, you’re mourning the anniversary of the death of a loved one.

Losing a parent is perhaps one of the last chapters in that timeline, at least in the normal current of events. Like everything else, no one is the first to go through it, but it feels like it is to each of us when it happens.

My father died one year ago today. He was my “adopted” dad, but he never said that. I was always his son. He was not perfect, and I’ve found out how even less perfect he was since he passed.

But he always was, and always “shall be” (to steal a line from Spock), my Dad.

We miss you Paw-Paw. 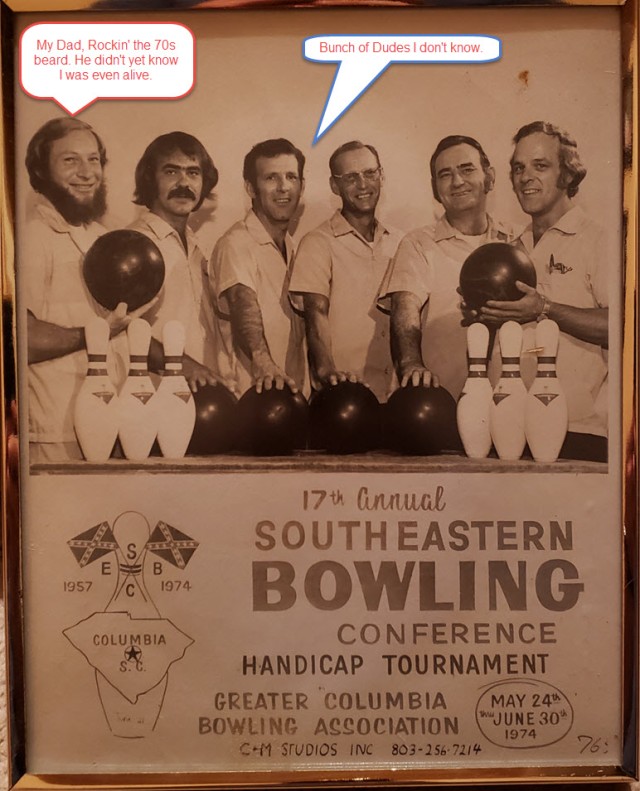 Robert Raymond Souther, 83, of Mills River, passed away Wednesday, October 17, 2018. A native of Henderson County, he was the son of DeWitt Talmadge and Reba Case Souther. He was preceded in death by his brothers John, Thomas (Tommy), and Floyd Souther, and two sisters, Florence Clay and Louise Houk.

Robert attended Mills River High School and in 1953, his Dairy Team scored 1100/1200 in the state dairy show, a record that may stand to this day. No is quite sure what they did with the $400 they won, but they didn’t use it to go to “Nationals” in Iowa–we do know that :).

After high school, Robert spent 8 years in the U.S. Air Force, but got out early to care for his ailing father, who passed soon after.

Professionally, Robert worked as an instrument and electrical engineer most of his life. He never met a problem he couldn’t (at least attempt to) solve, nor something broken that couldn’t (at least attempt to) fix. Robert was a quiet man, but possessing a great sense of humor. Few who met him didn’t immediately like him, and when together with his siblings, would happily recount stories of “four of us on a bicycle,” “wildcats following us through the woods at night,” and other childhood tales.

He is survived by his two sons, Robert J. Souther, of Franklin, NC, and Christopher D. Souther and wife, Megan Souther of Roswell Georgia; his brother Frank Souther and wife L.E. of Hemet, CA.; three grandchildren: Ethan, Aiden and Marissa; and numerous beloved nieces and nephews.

He is remembered fondly by his first wife, Carolyn Souther, also of Henderson Cty.

Robert asked that there be no funeral or memorial service. Instead, the family asks everyone to take a moment and think of the loved ones in your lives, give them a call and tell them you love them.