The baby is due in one month. (sssssh! don’t say it too loud or she might hear and come early!)

I am Waaaay under-prepared! As of this morning, here is what the baby’s room looks like:

As you can see, it’s pretty much…not done. CareerMom painted it a couple of weeks ago, but other than that, it still has all the trappings of a guest room.

Oh, I did move MLE’s crib out of his room into this room, but that was basically to make room for his big boy bed (which, unsurprisingly, isn’t helping him sleep any later!).

Those of you who have been following my blog for a while know that it took me a bit of time to get on board with this baby coming (it being such a shock and all), but I assure you, I’m not putting this off for some emotional reason or because mentally I think, “If you don’t build it, it won’t come.”

I’ve actually been very busy elsewhere in the house and THAT project is the lynchpin upon which the baby room’s completion will fall.

Our house is one of the only ones on our street w/out a finished basement and while I’m not one to “keep up with the Jones’,” (wow, what a weird series of punctuation. I’m not even sure that’s grammatically correct…) I am cognizant of the fact that as my chirrun get older, they will drive me crazy—that is unless I have a place to send them where they can venture forth and destroy.

Also, on a more practical note, since the baby room is taking up what used to be the guest room, AND since I’m trying to encourage MY family to come visit (and thereby babysit), I wanted to give them a place to go—a sanctuary if you will—when they do come. So, the basement consists of a bathroom, a bedroom, a GREAT room, and some other room-area that as of yet, has no known purpose (but it’s wired up for cable and Internet).

As you can see, it has no carpet; no doorknobs, no mirrors in the bathrooms and no ceiling fans (or um…light fixtures in the bathroom), but as soon as the carpet comes in, I’ll at least be able to move the furniture currently in the baby’s room, down to the basement and then baby room decorating can properly begin.

Wouldn’t you know it…my contractor went on vacation this week.

I’m a handy kind of guy. It’s not that I’m just sooo good with tools and all; more like, I’m just not afraid to try. And believe you me, I’ve screwed up enough stuff in my life that I have learned a bit about homebuilding humility and I know when to call in the experts versus trying to do it myself. Because home ownership is nothing, if it isn’t rife with constant projects that need your attention, I normally spend a good deal of my time at least walking through my basement, even if I’m not actually doing anything there.

As I’ve blogged about ad nauseum lately, I’ve been busy. I haven’t done much around the house. Plus, it’s winter. I mean, seriously…

But this weekend, what with the weather being perfect and all, I found myself with time on my hands to work on a couple of small projects (shelving in a closet) that afforded me the opportunity to spend time in my basement.

And that’s when I discovered that we have a little visitor.

The little bugger–dare I say RAT-bastard–has apparently made himself quite at home this winter in my absence. I first found his spoor over in the corner after moving a tarp that was lying on the floor. I then tracked his movements around the wall and under the toxic waste dump plastic shelving where I keep all of my chemicals. Which wouldn’t have been so bad, except he completely ignored the 20 things up there that would have killed him, and instead ripped into a 15lb bag of grass seed. He/it also apparently wallered in it like a Sumo wrestler at a Denny’s Breakfast buffet because it too was full of poo!

So now I’m off to the hardware store to try and find something yummy that will kill the thing so that I can, in a week or two, stumble upon his little dead body while tracking down some awful new stench in the house. Good times.

Home ownership is not without its rewards. For one, there’s a nice tax advantage to writing off the interest. And of course there’s the whole, “It’s something of my very own that they can never take away from me” fallacy that anyone with a mortgage will tell you is utter crap.

I’m convinced that if mortgage brokers and banks told the truth about owning your own home, that at least a third of the people who now own one, never would. For instance:

I think the most bothersome thing about home ownership though, are the surprises. The little things you never thought about.

In the two years that we’ve been in this house, I have trapped and released elsewhere, two squirrels who have taken up residence in my attic above my master bedroom–above my very bed in fact. Their scratching and merriment throughout the night have led to many a clenched sheet and frustrating loss of sleep.

Each time, I’ve tried to find their entry and have failed.

Due to some architectural elements in our house, getting around in our attic is a challenge. Getting over to the eaves in the attic is a near impossibility unless you’re Plastic-Man, able to bend yourself around corners and whatnot. (Actually, I hear The Redneck Mommy is “bendy”…).

Anyway, I had a general idea where the little critters were living once they got into the attic, so I put a piece of 2ft by 3ft plywood on the rafters and scooched over towards the eaves. Using a combination of hop and pull maneuvers, while also sliding under ducting and around wiring (in your head, imagine me doing my best Catherine Zeta-Jones “Entrapment” impression),

I finally got over to the eaves where I thought the squirrels were living and sure enough, nest-ola! And just beyond the nesting area and, wouldn’t you know it, out of my reach, I found the entryway.

Apparently, someone goofed when they built my house; I can find no other reason for this: 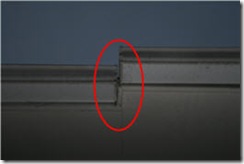 The back of my house is pretty much a straight line. In fact, as you can see from the air, my house is basically a big rectangle. However, about a third of the way over from the right, it suddenly cuts in about four inches and then runs straight the rest of the way. My only guess is that some construction goober goofed on one side of the house and they had to just fix it and this was the solution.

Anyway, where the two sections meet, there is no gutter and so the rain has slowly deteriorated this part of the roof over the years. I can see where it appears the previous homeowner “patched” it, but the patch was poorly done, leaving a hole the size of a pack of computer paper that the squirrels were using to make themselves at home.

So for nearly two hours yesterday, I removed leaves, twigs, pine tree seedlings, squirrel poop and desecrated insulation, and then after a trip to the local hardware store, patched up the hole as best I could with one arm and zero room to maneuver. It’s not pretty, but there’s not a hole yet that Great Stuff foam insulation couldn’t fill.

Also, I breathed in more than my share of animal poop dust, which my late-night education on the Discovery Channel tells me can be harmful.

I can concur. My sinuses have been killing me ever since. So anyway, if I suddenly start raving and foaming at the mouth, you’ll at least know that it probably has something to do with squirrel crap.

Well, that or kids. Take your pick.

As a present to the “family” this Christmas, I finally purchased an HDTV. This of course, required the upgrading of my existing Satellite TV, a fact that has escaped my mom and her husband since buying their widescreen HDTV more than a year ago (“I wonder why our picture doesn’t look as good as yours?”)

Anyway, the DirecTV guy came out on a cold morning and ripped out our old satellite dish from where it sat off to the side of our roof out of view of most windows and installed a new one.

He and I sat down and went through all the cool new options and overall, I was pleased. He could have been more warm and friendly, but…whatever.

Anyway, I’ve been enjoying my new HDTV experience, marveling at the picture and generally thinking, “Why didn’t I do this sooner?” and then remembering, “Oh yeah, I remember. Because it’s expensive as hell!”

Then, the other morning, I sat down at the breakfast nook table and looked up through one of my skylights and saw this:

My installer didn’t, in fact, install the new dish where the old one was, OUT OF SIGHT.

No, he installed the new one about 10 inches to the left of the old one and now it hangs over my skylight, protruding on the serenity of my tree-lined sky view.

I’m still trying to decide whether or not it’s worth the complaint.

What do you think?