Days pass and time moves on. Life has a way of flowing through you, whether you take note of its passing or not. We are but insignificant moments in the cosmic BIG.

This week I managed to mostly iron out the insurance details from our chimney fire. What I thought would be a simple inspection and a “chimney sweep,” turned into a full-scale rip-n-replace to the tune of “More Than I Want To Pay Out Of Pocket.”

The inspection showed some pretty major damage inside the chimney. This was undoubtedly complicated by the advanced age and deterioration already present. But, work should start in December and shouldn’t take more than a day or two. They will have to pull off the side of the house to get to the fireplace and replace everything; lock, stock, and barrel.

It’s a major pain, but I will sleep better knowing all of that “fire infrastructure” is new and sound.

Our newest pup, Misty Rose, blew out her ACL (cruciate) and meniscus and had them both corrected a week and a half ago. “Corrected” is code for “spent a lot of money on surgery to fix.” 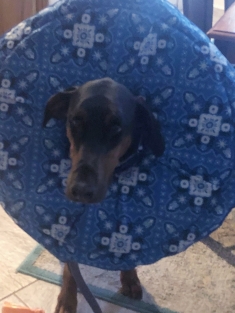 Since then, it’s been the “Sombrero of Shame” to keep her from yanking out her stitches, which she gets removed this coming Friday (Thank the Lord!). This will make caring for her so much easier since all I’ll have to worry about is just keeping her still rather than keeping her both still AND not eating her leg.

Once her stitches come out, it’ll be 4 more weeks of taking it easy and home-rehab.

But wouldn’t you know it…our other puppers (Shiner) developed a nasty urinary tract infection so now I’ve got two bum dogs to take care of and figure out how to adequately disguise foul-tasting medications.

On a sidenote; I raise all my dogs to stay in our yard (generally) and so I can let them out the door; they’ll go do their business and come back when they are done. That pretty much only works for me. Still though, with a gimpy dog, that means her “poop area” is much smaller than normal and it’s really starting to add up. Looks like I’ll be out with the shovel this weekend cleaning up.

In the meantime, CareerMom is away on business for a couple of days. But, God Bless her; she organized the kids’ lunches and figured out how to get kids to all the places they need to get to after school. I basically just have to “move” the pieces. And her family is great about helping out when we need them to, so it’s all good.

Just another day livin’ the dream!

It has been…a week, to say the least.

1. It being Halloween, my daughter and her friends decided to be Scooby Doo characters and they wanted to turn my beloved golf cart into “The Mystery Machine.” I love my daughter more than life itself, so I pulled all the materials together, my wife organized a painting party, and I did the rest. They had a heckuva time. That’s mine on the right:

2. Our 84-lb Doberman tore her Cruciate (that’s an ACL in humans) while also destroying her meniscus. The result was an appallingly expensive surgery, now followed by 6 weeks of intensive eyes-on, full-time cones of shame, and hot and cold compresses followed by leg massages.

3. I built a fire Saturday night (my 4th this season) and the chimney caught on fire (inside the pipe). I was able to put it out with the fire extinguisher, but not before three (count em “3”) fire districts showed up, along with two Bam-buh-lances. I’m grateful, but it felt like overkill considering I told 911 I already had put it out. But now, I have to get everything inspected and cleaned. The interesting thing is that, while I haven’t had it actually “cleaned” in years, annually I burn one or two anti-creosote logs, and had just done one the night before. New brand. Coincidence?

4. And lastly (so far), approximately one month ago, I received a Jury Summons; something that happens about every 4 or 5 years in my county. The issue is that I live in the very tip-top end of the dominant county in Atlanta. Which means that satisfying a jury summons in my county is quite the ordeal. See, look:

Note that these drives are indicative of when I would have to drive down to arrive by 8am: 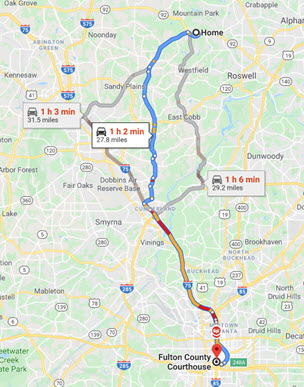 I drove downtown yesterday, arriving around 7:30 at the parking lot. Caught the bus over to the courthouse, and then stood outside in the cold for 15 minutes waiting for security to open up. Another 30 minutes later and I was inside. Per the desk clerk, “We have an unprecedented number of judges wanting jurors.” Of the 8 “groups” of potential jurors selected to “potentially report for duty” (usually only about 4-6 of the 8 have to actually show up) all 8 had to report. It was packed!

That also meant that any hopes of a quick, “We don’t need you; you are free to go” was dashed. An hour later, me and 39 other potential jurors were assigned a courtroom and down we went.

Once ushered into the court room, the judge proceeded to tell us the facts as she could:

We spent the entire morning first hearing the plaintiff’s and defense’s attorneys give a “lite” version of the case and then being questioned en-masse, raising our little paddles whenever we agree with something the lawyers on each side asked. Then, the remainder of the day was spent on individual questions. I was panelist #40, so I was dead-last.

It was a nail-biter of a day, and if you ask me, the opening attorney for the plaintiff (from the “Johnny Cochran” law firm) did a horrible job of biasing potential jurors with his opening remarks, and a very smart young lady to my left in the jury pool–whose dad was a lawyer as were several others in her family–called him out on it. When it was my turn to respond to questions, I was only too happy to join her chorus when asked, “Do you believe that starting out, the plaintiff and defense are on equal footing?”

My answer: “I do not. Based on the facts laid out by the plaintiff’s attorney, I already have some idea of how I might view the case even before it starts. I also believe it takes an extraordinary person to be able to completely set aside their personal beliefs and bias and judge something solely on its newly-presented merit. If Facebook has taught us anything, it’s that most of us are not extraordinary in that regard.”

Neither I, nor that young lady, were selected! What a week indeed…