It seems that I’m forever fighting the natural flow of water around my house. Since we’ve moved in, I’ve ripped out all kinds of old drain lines and replaced them with new ones, but problems still keep popping up.

Most recently, the gutter on the highest part of my house (where I can’t reach) started just gushing over the side, gouging a hole in the ground where it splashed during a really rainy day. My first thought was that I had a clogged gutter, but I couldn’t be sure because I couldn’t see in it.

The original builders had used that cheapo corrugated plastic piping and I’ve ripped enough defective pieces of it outta the ground to know it was probably suspect. So I found the start of the pipe at the bottom of the downspout, and using some exploratory shoveling, found where it plunged deep into the slope of my backyard hill. I stuck the hose in it and turned the water on to see if I could find out where the water was coming out, if in fact it was, but I couldn’t find it.

To make a long story short, I ended up ripping the whole thing out and here’s what I found: 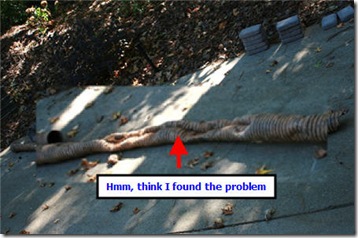 I replaced this plasty-crap with about 25 feet of 4″ PVC piping. Miraculously, I dug under two sprinkler lines and didn’t break either of them.

It was a banner day…but I have a feeling my back is going to be screaming tomorrow.
Now I just have to get that retaining wall done, but then I’m sure it’ll be something else…

Thanks to my own father making me sit and watch (and in a few rare occasions pitch in and help) him do things around the house when I was growing up, there are very few things I won’t tackle around my house. I can refinish furniture, build simple bookcases, perform general remodeling, install appliances, etc. In fact, I do so many things around here on my own because I’m too cheap to pay someone else to do it, that my in-laws are rarely surprised when I said I did such an such project and are in fact more surprised when I tell them I had to pay someone to do something (such as walk around on my roof blowing out the gutters!).

However, this weekend, I found something that I can’t do…carve pumpkins! I absolutely stink at carving pumpkins. Once would think that with the thousands of dollars in tools that I have in my arsenal, that I’d have the two or three things necessary to successfully carve out some eyes and teeth without breaking the darn pumpkin nearly in half, but I don’t.  We got two pumpkins the other day at the Dairy-cum-punkin-patch and my oldest son wanted to carve a picture of Thomas the Tank Engine in it. So, I downloaded the template. I also thought I’d just carve the boys’ names in the other pumpkin, so I picked out a nice creepy font and typed their name in MSWord in a size that would fit on a pumpkin and I was ready to go.

At first, everything went great. I got out my jigsaw and cut the tops off the pumpkins…perfection! This was going to be so easy…and cool! However, when I started trying to cut the design that I had traced out on the pumpkin, I quickly realized that the brute-force power-tool approach was not going to work. Unfortunately, that was AFTER I’d botched the first two letters in my son’s name. Leaving that one in disgust, I turned to the Thomas template and while it did turn out much better, it still leaves a lot to be desired. It looks OK at night with a candle in it, but I’m afraid that for the other pumpkin, I’m just going to print up the boys’ names on paper, let them color it and stick-pin it to the pumpkin and call it a day.

Hey, I’m no artist. I’ve always known this, and why I thought my handy-ness would translate into a useful artistic endeavor such as pumpkin carving is beyond me. But one thing about botching something is that it teaches you a valuable lesson. With luck, this year’s punkin debacle will fade from both boys’ memories as quickly as it takes my youngest to go through a box of diapers and by the time they are both old enough to appreciate punkin carving, and aren’t icked out by scooping out the punkin guts (my oldest wouldn’t touch them), I’ll hopefully have found a nice set of carving tools and perfected my craft.

Maybe next year I’ll get a third punkin and practice on it before operating on the real ones. All’s I can say though, is thank the good Lord that I didn’t become a veterinarian.