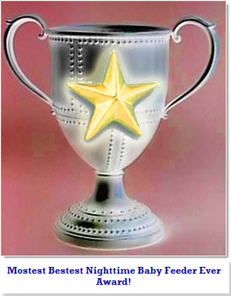 There should be a trophy award for parents who are able to get up in the middle of the night and calm a crying baby without waking up the entire house, or even the entire neighborhood for that matter. And parents who pull this off in an apartment complex should get a cash reward on top of their trophy (“Do you need cash NOW?” I hate those commercials!).

Overall, I’d give myself fair marks for being able to pull this off. I’m probably about 80% effective when it comes to being able to put the baby back down, but last night, I deserve an Emmy nomination for my performance…

Our youngest woke up around 12:40 a.m. I heard him before he really got wound up, so I headed downstairs for the obligatory bottle. We normally leave a small fluorescent light on under one of the cabinets to light our way, but I suppose after two children, it has burned out and I’ve been too lazy to replace the bulb. I’m a man, so naturally I can find the refrigerator in the dark if need-be, so I opened it and grabbed a bottle, then turned to the right, walked one-point-five steps to where my memory says is where my microwave resides, opened it and stuck the bottle in.

For you mothers gasping in horror at the thought that in my sleepy state I’ll over-warm the bottle and end up scalding my child’s mouth, not to fear; I’ve done this hundreds of times, and not burned a single child yet.

Now, our house is about 19 years old, 20 really if you count when they actually started building it. And while this isn’t old for a house, it’s old for the appliances, which are original. In appliance-years, 20 years is really like 40—not so much because they don’t work as well, but mostly because after 20 years, whatever fashion style your appliances matched 20 years ago has long since disappeared from the showrooms of today’s appliance vendors.

For whatever reason, my mind was sure that, despite any light whatsoever, I’d be able to instinctively hit “3, 0, Start” on the microwave keyboard, but I didn’t. In fact, I’m not sure what I hit, but whatever it was, it started the microwave counting down like some sort of radiation time-bomb. I kept waiting for it to say something like, “Just what do you think you are doing Chris?” (“A Space Odyssey” reference for those of you playing along at home).

After pressing a few keys trying to kill it, which only really served to enrage it further, garnering a cacophony of “beeps,” I ran over to the light switch and turned it on so I could see what the heck I was doing.

Subsequent attempts at stopping the countdown were useless and by this time I could hear the baby ramping up for a mega-scream, so I quickly keyed in the correct “3, 0, Start” sequence and LO! It worked.

Bottle warmed, I ran upstairs, grabbed the baby out of his crib and before he could wake up the whole house, I stuck a bottle in his mouth and started changing his diaper. All is well with my soul…

…it wasn’t stopping! The microwave had apparently finished its countdown and was not going to be happy until I acknowledged it.

I quickly buttoned up the baby (whoever thought 15 buttons on a onesy was a good idea should be shot!) and ran downstairs to shut the microwave off, only to find that none of my attempts at cancellation worked.

Knowing I had only moments before the baby dropped his bottle and started wailing for assistance, I dashed out into the garage and flagrantly started flipping circuit breakers in an attempt at shutting off all power to the microwave and thankfully, I hit it on the third try.

I then ran as fast and as quietly as humanly possible back upstairs just as the baby was finishing up most of his bottle. I picked him up, burped him, put him back down and let him finish his bottle and quietly go back to sleep.

Nightly duty done, now the only thing left to do is calm down enough to go back to sleep before the alarm goes off. Maybe if I had a nice, trophy to snuggle up to…