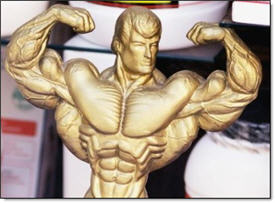 At 34 years of age, I’m not old by any stretch of the imagination; however, I’m no spring chicken either. After nearly 15 years of fairly heavy weight training, my joints and skeletal system (especially my back) are probably more in line with a 44 year old. A study back in ’01 revealed that despite any bone density gains weight lifters earn from throwing around heavy weights, once they stop, those gains rapidly diminish. Add to that all of the joint and spinal damage nearly all weight lifters garner, and you gotta wonder why a person does it.

As I was working out this weekend, I noticed a young guy who is frequently there at the gym when I am. He’s probably in his mid-to-late 20s and it’s always been obvious that he has a great body, mostly because when he’s doing legs, he rolls his pants up so everyone can see his quads, etc.  And despite being obviously muscled, I never realized how much until I saw him in one of those tight Under-Armour® shirts (white) this weekend, where you could see every muscle, including one of the best sets of abs I’ve ever seen. Now, despite being 100% heterosexual, I can tell you that, from one weight-lifter to another, the dude looked incredible!

I can also tell you however, that he didn’t get that way naturally. I’m not saying he’s using steroids (I’m not “not” saying this either), but naturally, muscles simply don’t get and stay that full (read: pumped) without some help. It just doesn’t happen.

Of course, I started reflecting back to the time when I was “that” committed to my body. I was never in my wildest dreams as chiseled as this guy, but I was worlds better than I am now and it occurred to me what a young-man’s game this exercise thing really is. Some people might say I’m just being petty and jealous, but the truth is that it takes a phenomenal narcissist to create and maintain that kind of physique.

When I was 25, I once had a date critically tell me, “No woman wants a man who has a better body than she has.”

Truer words were never spoken. The kind of commitment it takes to maintain the thin-skinned six-pack look that models make look so easy requires an approach to eating that is fanatically limiting. It requires that every waking moment that isn’t taken up with work or other essential activity, be spent either at the gym, or hitting the pavement burning off the calories you just ate that your body didn’t automatically siphon off to feed your muscles. It takes the ability to turn the guilt you feel over eating a slice of pizza, into something positive like a few extra reps on the bench press. Basically, it requires sacrificing nearly every facet of your life that doesn’t revolve around your body, and that, my friends, is why you see so few married couples with children who are in such great shape.

Sometimes it takes this kind of mental meandering to convince yourself that you don’t suck. I’ve been really down on myself about my weight gain lately, and although it’s nothing major, it’s a stark departure from my 20s. Plus there’s that whole drive to look good for your mate. I suppose in the end, all you can do is your best and hope that it’s enough.

I mean, with two kids, who has time to be a narcissist?