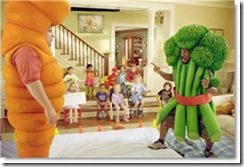 As I admitted (gasp!) to CareerMom this weekend after she scolded me for saying, “Dammit!” in front of the boys, I’m not perfect. I drink a beer in front of them every now and then. I get annoyed when they keep asking the same, or similar, questions time after time. And OMG! When MLE starts crying in the car, I could scratch my nails down a chalkboard and find a happier place. I’m not perfect, I’ll freely admit it.

I am also, I’m discovering, a sexist and a hypocrite to boot!

See, despite my, “Hey, men are just as qualified as women to be child-care-givers,” attitude, I’m finding myself having a hard time accepting the fact that a man now runs our daycare facility.

What happened is, our daycare, which was previously run completely by three generations of women (they all worked there at the same time) has apparently made so much money off us parents that after only five short years, they are selling to a national chain of daycare centers (sounds like, “Grids R Grids”). We actually found out about this poorly kept secret this past weekend, and it was confirmed this morning as CareerMom greeted the new daycare owner, a man, in a wedding-reception-like gladhanding session as she dropped the kids off.

And I’m not too thrilled about this. I think part of it stems from the fact that another large chain of centers in our area (sounds like, “Snoddard School”) is also run by a man who just creeped the hell outta me each time I visited there; so much so that right after enrolling MLI after he was born, we pulled him out based almost entirely on the “creep vibe” the dude put out. So, I was already biased against men running daycare centers.

Call me crazy, but I can’t for the life of me, figure WHY a man would WANT to run a daycare center! I’m pretty sure that I lack several a gene that I consider prerequisites to caring for children over extended periods of time, such as:

…and there are others I’m sure.

So here I am, finding myself railing against my kids going to a daycare run by a man, when some of the most well-adjusted men I know, are stay-at-home dads. Admittedly, running a daycare is probably more about project management than it is hands-on with the kids, but still…I can’t shake the bad feeling. I can’t shake the feeling that a man is more likely to cut corners if it’ll save a buck than a woman would.

What do you folks think?

4 thoughts on “"It seems my hypocrisy knows no bounds…"”