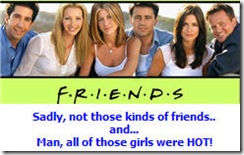 We all have them I expect. Some perhaps more than others, but they’re there. Lurking…waiting for the perfect opportunity to spring up on you when you least expect it. They’re resourceful, they’re sneaky, they’re…parents of annoying children who want to do things with you ALL THE TIME!

Ours is a divorcee’ with a daughter who, for one reason or another, has glommed onto my family as if we were a rich uncle come to take her away from the orphanage. She’s loved MLI since he first started going to his daycare. When MLE was born, she always asked, “Can I touch him?” as we’d bring him around while picking up MLI.

We also included her and her mother in some fun outings with our kids and others. And now, she’s driving us nuts. Both the daughter and the mother.

If it’s not the daughter begging either myself or CareerMom to go do something after daycare, her mom is calling up acting as if we had made previous plans to do something, when we know good and well we had not.

We watched her daughter overnight a while back when they moved and it’s only gotten worse since then. The daughter didn’t even want to leave, and keeps asking if she can come live with us.

The mom called CareerMom over the weekend and the conversation went something like this:
CareerMom: Hello?
Her: “Hi, this is “L”, I was just wondering if you wanted to come over on Saturday for swimming?”
CareerMom: “We have a big work picnic this Saturday, so that won’t work for us.”
Her: “Well, how about Sunday?”
CareerMom: “Sunday isn’t good or us either. Maybe we can do something sometime next week.”

Her: “How does Monday look for you?”

Let me just stop here and point out that there’s a fine line between being insistent and being rude, and CareerMom, who does not subscribe to my particular brand of “persistence” finally caved rather than making it (any more) obvious that she didn’t want to do anything.

Over the weekend, CareerMom got buyer’s remorse and decided that the last thing either of us wanted to do was go over there after work, spend a hour swimming, and then eating her idea of dinner (usually McDonalds) while watching both hers and our kids. So she’s going to call her today and cancel.

Or so she says.

But, people like this just don’t get it. If we are going to spend so much time with another parent(s), I’d like it to be with A) another little boy who shares my kids’ interests, B) with another couple so that if I come (and I usually do), I actually have someone to talk to who’s not bitter about life and men in general.

Now OK, I should just keep my mouth shut and do the Christian thing and help out this poor lady and her daughter who are in need (I’m also sure Jews would do the right thing here too, but since I’m a Christian, I’m using that analogy).

But they aren’t really. She’s not poor. She has a good job. She has a 4-year old daughter; only one. The only thing she doesn’t have, is other friends. So really, how much should we be going out of our way here?

3 thoughts on “Befriend a child; adopt a family”