In the grand scheme of charity, I’m a fan of the “Teach a man to fish” mantra rather than being on the “Give a man a fish” side of things. This is not surprising considering my political views, but it goes deeper than that.

I’m just not a handout kinda guy. My folks didn’t pay for my college. My folks have never given me any money since I left home outside of small sums for birthday and Christmas gifts and when I was out of work for several months after a layoff, I didn’t file for unemployment (though if I had to do it all over again, I definitely would!)

Asking for stuff just isn’t in my genes. Now, if you want to just voluntarily GIVE me things, well now, that’s a completely different story. Please make your checks payable to…

This carries over to my charitable contributions as well. I have absolutely NO problem donating things to charity, and I also give money to church (ahem..*cough* *cough*…when we go).

CareerMom is just the opposite of me. She donates at work through United Way, and she was also once suckered into giving by some group that “gave” her some nifty return address labels. Now she gets no fewer than 8 or 9 charity requests by mail each week, most of which I toss in the recycle bin in the garage on my way in the door in the afternoon (I know, I know…I’m baaaad!)

I’m also not a huge fan of just giving money to a big organization, only to have half of it eaten up in administration costs, or having it go to some faraway place helping God knows whom, with God knows what.

That said, if everyone in the world were like me, it would probably be a pretty miserable place. So, I recognize my own shortcomings.

But regardless of your beliefs on the subject, the very idea of Charity, is that it should come from the heart. It shouldn’t be forced upon you because then, it’s not really Charity–it’s taxes.

With it getting near the holidays, charities are cranking up their efforts to get their piece of the pie this year and my company, like many across the country, have joined them in their efforts. I have no doubt that this is mostly just so Public Relations groups can tout how much money they’ve raised so that when next quarter’s earnings report comes out, perhaps folks will cut them a little slack.

Regardless, I’ve been ignoring the Employee Charitable Contribution Campaign e-mail for about a week now. I have not in the past, nor do I now, have a desire to have some charity automatically deduct money from my paycheck each month. So when I got another one this morning, I ignored it too.

Then, as I was sitting at my desk, my chat program popped up: 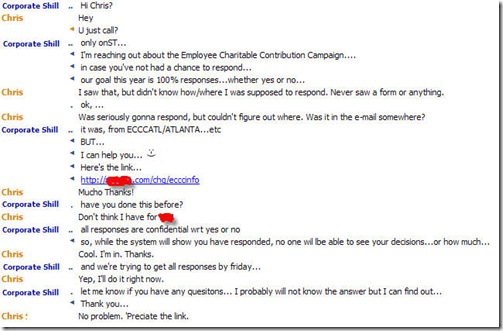 So, whether you donate or not, you’re supposed to “confidentially” respond whether or not you’re going to donate.
Fine, whatever.

I followed the link she enclosed and here’s what I had to fill out:

It’s not enough to say that you don’t want to donate, but they have to go about it in a way that makes you feel guilty about not doing so.

THIS, is what drives me away from it every year. It’s the tactics, as much as anything.

I truly do hate to sound all “bah Humbug’ish,” but this isn’t exactly the best time to be hitting people up for cash. But I do have an idea for my company and others who REALLY want to gen up Charity contributions:

You give me a guaranteed employment contract for the next calendar year, at my current or better salary and benefits, and I’ll donate.

3 thoughts on “Charity, begins at home”