Some of my favorites books from my childhood were contained within a set my brother received in 1974, which I held onto and now claim as my own. They were titled, “The Bookshelf for Boys and Girls.”

In all, I believe my set included approximately ten books, on all manner of subjects, art, science, etc.; but, my favorites were the stories. These, along with another book of Fairy Tales, kept me reading whenever my brother would run off with his friends, or when I just needed some alone time. 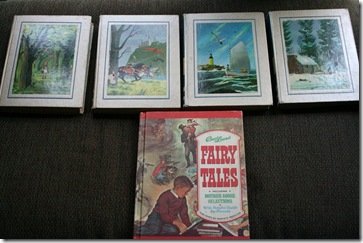 We’ve recently started reading them to MLI, because his imagination is finally outgrowing Curious George and Dingo…sorry, I mean Diego. And he seems to like them a lot; although I had forgotten how violent some of them were.

Just last night, I was reading the story about the little Tin Soldier. You’ll recall, he only had one leg and he fell in love with a little paper ballerina. But, fate stole him away from her where he then rode a paper boat into the sewers, only to be eaten by a fish, and finally returned back home when someone in the house went to the local market and purchased the fish that ate him. Unfortunately, just as the Tin Soldier and his lady were to be reunited, the Tin Man was blown into the fire where he melted.

Yeah…I had gotten too far into the ending before I realized his fate. I had forgotten that, like many REAL fairy tales, the Tin Soldier was not to have a happy ending.

This got me to thinking about how parenting has changed and I was delighted to find, in the preface of the book titled, “Folk and Fairy Tales” from my set, a forward by one of the editors. It was delightfully candid (if a tad sexist), but I found the honesty of yesterday refreshing:

“Once upon a time parents had to bring up their children without graded reading plans. The children got either little sermons with the moral sticking out like a red flag or the fairy and folk tales that have come down to us from the feudal Middle Ages. Many children had these stories read to them, together with Mother Goose, while they were still in their perambulators.

Some of today’s psychologists shake their heads over the effect this literary diet may have had on the children too young to cope with such strong doses of morality and immortality.

But most children can stand a good deal more than adults think they can. Besides, some mothers have always been blessed with common sense. If they saw that some gruesome tale induced nightmares, they stopped reading it and made up, instead, little stories about ordinary children and animals within a child’s understanding.”

The normal healthy-minded child is not harmed by fairy tales, but it is unwise indeed to expose a child to them before he is emotionally ready to accept them as fantasy. The child whose life is generally satisfying and secure, and who is mature enough, will take the most gruesome fairy tales in his stride, as he does the blood-and-thunder shows he sees on television.”

Isn’t that great! Imagine, parents—not organizations or the government—deciding what is best for their children. Wow.

But see…a tad sexist…but not surprising considering the gender roles at play. I wonder what they would have thought about today’s video games?

8 thoughts on “Childhood stories…then, and now”