Ever cognizant of my reader’s needs, I thought I’d post a shorter blog today rather than another behemoth outpouring of my soul such as what you’ve been privy to all week.

This morning, the boys were both up by 6 a.m., thus I had plenty of time to get things ready, including their breakfasts for school. But, just as I was putting the final touches on breakfast, which included putting MLI’s Pop-Tart in the toaster for warming, it went down the side of the toaster chute and got stuck behind the little wire lifty tray thing. I tried flipping the toaster. I tried shaking the toaster. I even tried using two butter knives like little tongs, but alas, it wasn’t budging.

I’m my frustration, I might have flipped the toaster over and banged it on our very hard ceramic sink.

Oh, and of course, right after that, MLI smarted off. NOT the best day for that. 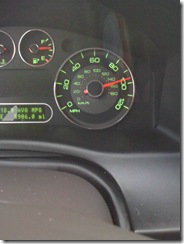 Now, based on the previous picture, you might think that I summarily strapped the kids in their car seats and took off like a bat out of hell, going 100mph down our little suburban roads.

While that would have been waaay cool, the truth is much less exciting. Our speedometer is broken. It’s been slowly getting that way for a couple of weeks, but now its baseline is 100mph at a dead stop.

Well, at least if I get stopped, I have an excuse. Looks like we’ll be “one car’ing” it again this weekend.

HEY, HAVE A GREAT WEEKEND!