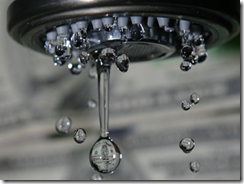 I don’t post many political blogs. This is mainly because I know that many of my readers don’t adhere to the same political views that I do, and I don’t want to piss off the few readers I do have. But with tax time hitting and everyone trying to decide whether to do something fun with their refund, or whether to just save it, I thought I’d give a little lesson on Reaganomics–specifically “Trickle Down Economics,” which the Democrats have poo-pooed to death with this stimulus plan.

Reaganomics, in this instance anyway, is the idea that tax cuts that benefit everyone the same, actually benefit the middle class and poor the most. Now true, if you make a million dollars a year, and you save 2% on your taxes, then you’re actually getting back a heckuva lot more than someone who makes $50K per year. But let me use my own example to show how it’s not this cut and dried.

CareerMom and I do pretty well; as my family (not you “TT” or “BP”) is always quick to point out in a passive aggressive sort of way (“Wow, if I made the money you do…”). It drives me nuts because most of them also live in Timbuktu, by choice. So, while they don’t make much money, their cost of living is very low as well, so it doesn’t cost them as much. But while we do well, we still have a lot of bills, and thus, our spending cash is probably nearly the same as a family living on half what we do.

When you make a certain amount of money, there are only a few ways in which you can keep it out of the government’s hands:

If you’re obscenely well off, there are more ways, but these are the basic ways most people you know can save money.

I mention all of this to point out that when CareerMom and I do get a little chunk of cash back, while we’re not having to use the money to pay off the credit card that we had to use for vehicle repairs, we’re also not so flush with cash that we can just run right off to Hawaii (in fact, the only “Island” vacations we’ve been on, were to St. Thomas because CareerMom won it along with a bunch of work people, and once to the Bahamas at a very inexpensive all-inclusive–something I would NOT do again OR recommend).

With the economy where it is, it’s making even those of us with a little extra cash laying around, reconsider what to do with it. For example, with MLS (My Little Surprise) on its way, we’ll be losing our guest room. Now, we have a very large, unfinished basement, but even to convert one room and a bathroom down there will cost about 15K. Using some creative financing and with me doing a LOT of the work, we could do it, but we’re not sure we want to spend the money right now because that would completely sap us dry. So, that’s 15K NOT going into the economy.

On a much smaller scale: I was working outside the other day and a guy, who was apparently doing some pressure washing on the neighbor’s house, came over and tried to pitch me on having mine done. He was insistent that he could do it “extremely” cheaply, but I still couldn’t let myself spend that coupla hundred dollars on something that we didn’t really NEED.

So, even the small jobs aren’t getting done, and the guys who could really use the money, aren’t getting it. Having illustrated this, I’d love for the guys in Washington to show me how giving the “middle class” an extra $500-$1000 is the same as cutting everyone a tax break, which would then potentially loosen the wallets of people like us and in turn provide even more cash into the economy.

No sir, there’s only one thing that will make me feel better about spending–having more to spend. Also, from me to you…a Tax Tip: If you do your taxes via TurboTax or TaxCut, don’t let them deduct the e-filing fee from your refund. On top of the regular charge, they also tack on an additional “Handling” charge. For TurboTax, it’s another $29.95 for doing nothing more than transferring money from one account to another. No, just pay for it up front with a check, or your debit card and save yourself some green!

5 thoughts on “A simple sample of trickle-down-economics”