When I was ten, my parents decided it was time to move from the suburbs of Mobile, Alabama and our comfy suburbanite home where I had lots of friends, a great school, and an active social life at church, to the relative quiet and serenity of the country out in Semmes, Alabama. If my wife turned to me today and offered me that opportunity, I would jump at it. But, as a ten-year-old, I was less enthused.

We didn’t have a house yet to move into, but we had some land. My father had purchased five acres of property from a family friend and the plan was that we were going to build the house ourselves, or as much of it as unskilled labor can, and on the cheap. What fun!

END_OF_DOCUMENT_TOKEN_TO_BE_REPLACED

I recently found an interesting Web tool called “Zillow.” It’s billed as a Real Estate tool that both agents and home buyers can use to sell and compare houses in a given market. It’s pretty neat in that it lets you, as a homeowner, see what your neighbor’s houses are assessed for, along with square footage, etc. So, if you think your house is bigger than your neighbors, but you weren’t sure enough to go crowing about it…well, now you can.

Another interesting feature is that it uses other freely available aerial photographs to show the houses. Granted most of the pictures aren’t detailed enough to see what color paint is on the house, but you can see the top of the house and the surrounding land.

I thought it’d be fun to look up some of my old stomping grounds from my childhood and sure enough, I was able to find them. For instance, our first house in Mobile, AL is now selling for about 95K, which in Atlanta prices, would get you a hovel in an undesirable part of town. So, I then looked up our second house, the one my family built with our bare hands, and while there was no value listed, I was able to see the general layout: 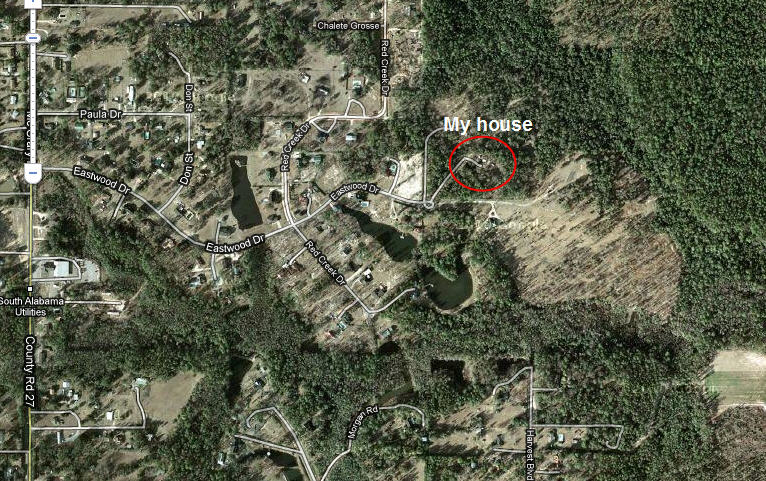 When I lived there, we owned five acres on the NW side of a huge tract of wooded land owned by a great uncle-in-law. It appears that it now has been junked up a little bit and more trees cleared off, but it’s still clearly my old house. And boy does that bring up some memories…some bad, some good, some just plain old indifferent. It’s funny though how nostalgic seeing the place makes me.

For instance, that bare spot to the SE of the house…I cleared that out myself over the course of a couple of summers. Mind you, this was in the heat of Alabama summer. I remember working out there during the day (because my dad made me) and being completely soaked in sweat; then going inside the a/c and drinking gallons of sweet tea. I remember our Dobermans running around in the woods as I worked, chasing after who knows what. I remember the girls who used to drop by…well….never mind about that. Suffice it to say that there is apparently something to be said for a sweaty, slightly overweight teen-age boy holding an axe and a pair of lopping shears in the middle of a sweltering Alabama summer. Ah…the memories.

And oh the fishing. Fly fishing, bass fishing or just sitting on the banks with a cane pole in one hand and my faithful dog lying next to me hoping I’ll throw her a piece of my PB&J. It’s almost enough to make a guy get all choked up.

I never really had any desire to go back and visit my old home, until now. Now, I just need a good excuse. Hey, only four more years till my 20th high school reunion.