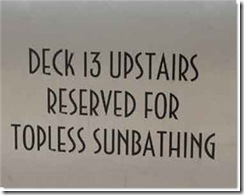 Savvy men know that there are certain boundaries one is not allowed to cross–wait, make that should never cross–with women. One of those is giving your best friend’s hot wife a kiss, even if it’s one of those wannabe European dual-cheek kisses. Another is anything to do with a woman’s weight, and most especially, if you’re married to her, or you are otherwise enjoying a FWB kinda relationship.

Just recently, a very attractive lady at my office openly wore a maternity shirt for the first time since she got pregnant. I had first noticed that she might be pregnant a couple of months ago, but having been through two pregnancies with my wife, and having listened to her come home and complain every day about the many unsavory comments she received, I kept my mouth shut until I was certain this lady was pregnant and even when I did acknowledge it, I did so with a hearty congratulations and some joke about how I thought she was pregnant but how I wasn’t going to stick my foot in my mouth until I was sure. I thought I was very clever and witty–she probably thought that I thought I was very clever and witty–but really wasn’t.

But we men have realized that simply knowing when to play dumb is not enough. See, women test us from time to time and we men have to be ready–constantly on guard.

The Lands End swimsuit catalog is not for teens or for supermodels. Nossir, it’s for normal women. Women who perhaps, have had children and who aren’t quite bold enough to go sunbathing in Brazil. So the entire catalog is full of swimsuits with catchy slogans like, “Minimizes those problem areas” and “Strut your stuff without showing too much.”

Problem areas? Stuff? I guess a problem area for a woman is like my love handles. They’re there and nothing short of going all bulimic on it is going to make it go away. So I avoid tight-waisted clothes so as to minimize the muffin-top effect.

Anyway, I’m sitting there drooling over the shiny, waxed peppers in my catalog when CareerMom reads from hers:

“OK honey, do I need a swimsuit that:
A. Minimizes my shoulders and bust?
B. Slims my tummy and waist
OR
C. Minimizes my hips and thighs?”

Dude, I froze. Time stood still. The sandwich in my mouth just sat there collecting drool while my mind feverishly searched for the right answer. The two sides of my brain warred with each other; the right side pleading for me to say something clever and funny in an attempt at diffusing the situation; the left side begging for some semblance of sanity while also reminding me that CareerMom was going out of town next week and that I’d probably want to be in my wife’s good graces this weekend.

Probably two or three seconds went by and finally, the perfect response won out and I said,

“I’m not touching that with a ten foot pole. How stupid
do you think I am anyway?”

CareerMom just smiled and nodded her head. I finished my breakfast, got up from the table and as I was putting my dishes in the dishwasher, right brain won out and I blurted,

“Do they have one that maximizes your breasts
and shoulders?”

Damn…I couldn’t just let it go could I?