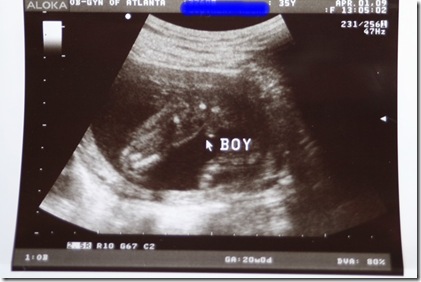 After we got the lil’ booger to quit flopping around, it was confirmed! I suppose it’s only fair since, were it not for my dad adopting me and my brother, his family name would have ended with him. None of my dad’s three other brothers had any boys of their own. I suppose that, despite there not being any of his families’ blood in me and my kids, those who come after us need not know that.

We’re right at 20 weeks, although the baby is mostly measuring from 18-19 weeks. We P&P’ers are small people, so we’re not worried. Everything else looks fine and his…um…”junk” certainly seems to be working!

TEN YEARS LATER UPDATE: So this all took place at our 20 week (5 months!) ultrasound. A month later we returned for a wellness check and since we’d have the misfortune of miscarrying a couple of times, I went with CareerMom for most of these.

As we were standing in the room, the ultrasound tech was doing her usual chatting and she said the word, “She.”

I quickly glanced down at CareerMom and we exchanged confused glances. I then said, “Excuse me. You said “She.” We have bee told at our last three exams that it’s a boy.”

The tech replied, “Nope, it’s definitely a girl.”
It WAS a girl! And she’s amazing!